gciadmin2020-10-02T15:36:24-05:00
Quarterly Update
As you know, our philosophy and approach to investing is to focus on the long- term cash flow growth of the companies we invest in, rather than focusing on short term market movements. As such, quarterly updates such as this are of far more value to you if we focus more on how we are growing your wealth, rather than simply reporting on market movements. However, be assured that we had a very positive start to 2019, both in absolute terms and also relative to the respective indices.
The reason we are keen to avoid too much market/ price driven commentary is that we must remember that stock prices and market movements are not necessarily reflective of the actual values of businesses. That is a sentence that many people would initially disagree with, but it is fundamentally true: the stock price of a company does not necessarily represent the value of that company, it only represents the market’s opinion on the value of the company. That can be (and often is) very different from the intrinsic value. To conceptualize this; imagine that we wanted to buy a company. The price we would pay for it will be a function of how much cash we think it can generate for us during our ownership. That is a subjective number, but it is also unlikely to change a huge amount over a short-term period. This is the same logic that fundamental investors apply to the stock market- what do we think this business is worth if we were to buy it outright. Then, let’s see if the market price is above or below that value. If the stock market is below, then we are buying the shares, if above, then we’re either selling, or waiting to buy.
Let’s take a real-life example. Facebook shares have appreciated 35% since December. So, in a little over 90 days, the ‘value’ of Facebook (as dictated by the market) has increased by $177 billion. Is that really realistic? In just a few months has the underlying value of the company really changed by such a huge amount? Probably not. What has happened is that the sentiment towards Facebook has changed. The underlying value may have moved slightly, but unlikely to that extent. We conducted a detailed valuation analysis of Facebook shares back in 2018 when the privacy concerns first appeared. To do so, we projected forward our earnings expectations, including a substantial cut to the growth rate as a result of heightened regulations. Based on our conservative numbers we determined the intrinsic value of Facebook shares to be at least $200. At that time shares were trading in the $170s, so we bought some. In December they fell to around $130, so whilst other investors were panic selling, to us the shares were even more attractive, so we bought more. As we stand today, shares are back around the $170 level- so we’ve seen enormous shifts in the market’s perception of value even though the political and regulatory landscape has not shifted markedly since the summer, despite the relentless news commentary. To us the underlying value hasn’t changed a great deal, so if we’re presented with the opportunity to buy more at a deep discount, we will do so.
Short term market movements like that are driven by sentiment and investor flows, while over the long-term share prices will track closer to genuine underlying value, as the impact of earnings growth (or declines) outweighs sentiment. The market can only be exuberant about a company for so long before that company has to actually deliver and generate some earnings (think 2000 tech bubble), and conversely, the market can only be negative about a company for a short period if that company continues to grind out excellent earnings growth (think Facebook). At some point, the market has to accept reality. This is why we are happy to maintain positioning even when the market or ‘styles’ may be moving against us. Over the long term, those features become irrelevant.
To highlight this, consider the following chart that shows the returns from an investment assuming that the valuation multiple contracts 25% immediately on purchase and never recovers, but earnings growth continues: 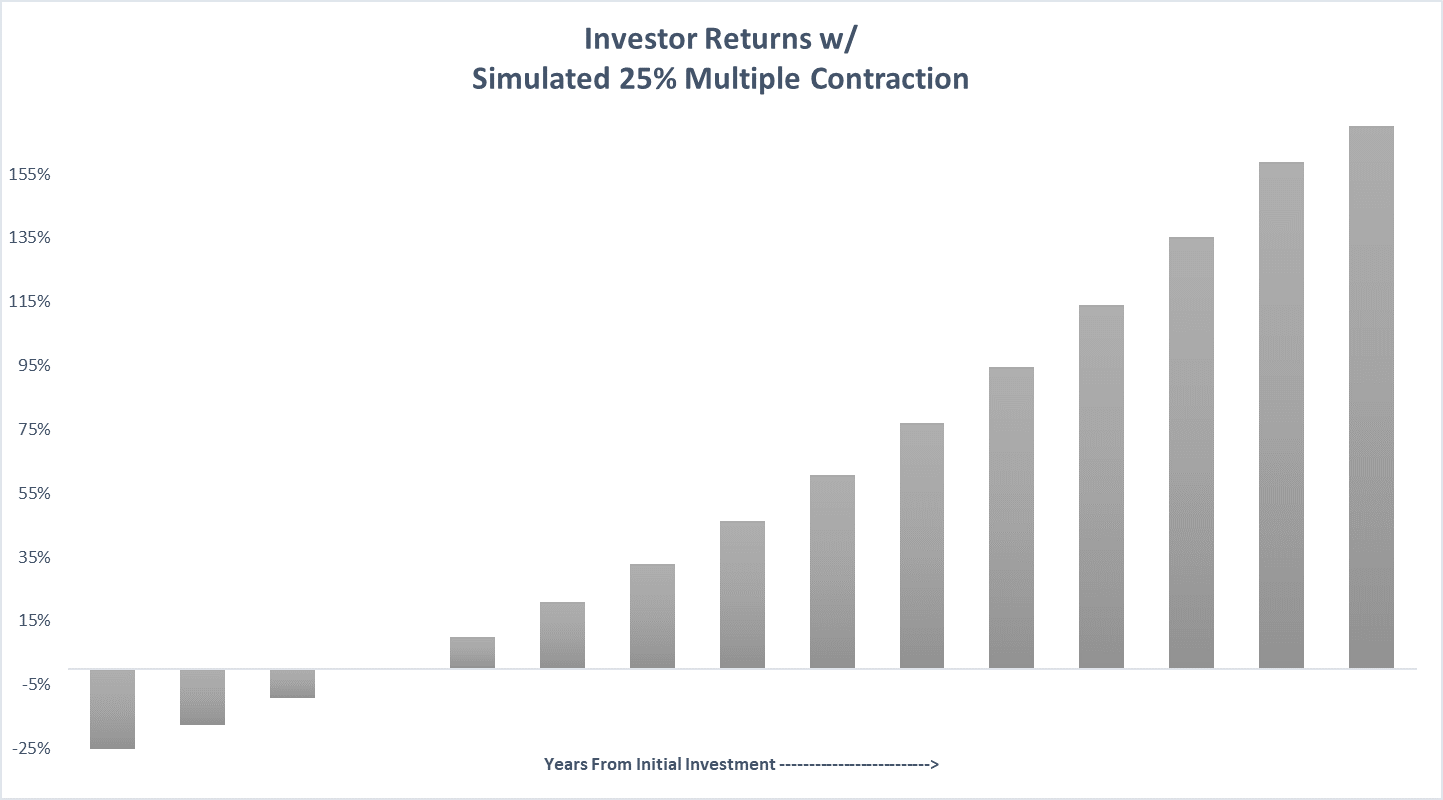 As you can see, after a reasonably short period of time, the initial valuation contraction becomes less important, with the continued earnings growth driving returns. Therefore, we focus our time and effort on ensuring we understand a business and what its earnings could be in the future. That is the most secure way to grow wealth over the long term, even if it isn’t the fastest.
As always, please get in touch with any questions that you may have.

The S&P 500 continued its rally in the third quarter, adding... read more

Dear Partners, Our performance in the third quarter of 2022 was disappointing.... read more

Globescan Capital was founded on the principle that investing in high... read more